Getting Furious on ATVs

We recently had a chance to visit Climax to see, play, and even speak about the new ATV Offroad Fury that's in development. Why Climax? Though Rainbow developed the last two ATV titles, the boys at Climax are handling this third and most promising one yet.

Before we jump face first into a pool of muddy specifics, don't let the passing of the buck fool you. While there is a new developer onboard, fans of the original Offroad Fury titles will discover a wholly satisfying experience within this one. We've played them and this one. Trust.

Not a company to reuse somebody else's work, Climax has developed a whole new engine for Offroad Fury 3 complete with all new art. Remarkably, the engine isn't a total departure from the technical and stylistic precedents the first two set for this subgenre of racing. While it offers noticeably cleaner textures, smoother, infinitely more detailed environments, richer particle effects (splashing water and mud), and more carefully put together ATVs and riders, it's still astonishingly Fury. It is clear Climax was very thoughtful about just how and where the ante was upped. The coolest of all the new graphical additions is by far the more lenient, more destructible environmental objects that dart the road. 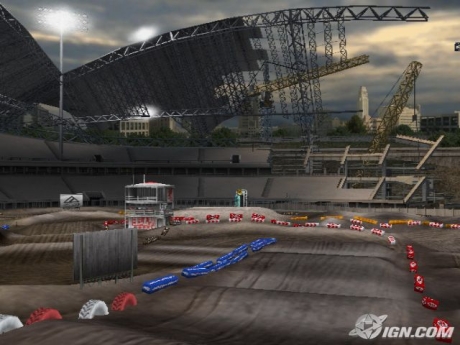 At some points in time (in the first two games), crashing into the smallest of obstructions at the slowest of speeds could cause your driver to rocket headfirst to a certain last place finish. This was a real issue in ATV and ATV 2. Now, fences collapse and track markers tip over, alleviating some of the more outrageous frustrations of the first two. Of course, there are other little tipping, rolling, and breaking things strewn about, but if you nail a tree, you're still going to nail a tree.

Further improvements to the series include reworked artificial intelligence. Those who played deep into Offroad Fury the first and its sequel discovered that the AI eventually became more concerned with landing on your head and causing distress than actually finishing a race in style. Sure, the new AI schema is still aggressive and intends to win, only it's not as needlessly vicious as before. This allows a greater emphasis to be placed on tricks, where once they would almost certainly spell doom because of the...bastards. Oh, how we hated them so.

The new trick system includes about 34 specials that can be linked together to form greater combos for more points. The points all play off the new garage system, which allows for the purchase and customization of ATVs (some 24 in total). While riders themselves are not upgradeable, the new garage includes about 20 distinct component parts, not counting colors, logos, and such to toy around with.

You're going to need the new parts and rigs to realistically compete in the game, for while it's a new developer, it still plays very much like ATV This means if you're keen on plowing through the career mode, you're going to need to brush up on a few skills. Of course, this is a very specific type of racer. While it does offer tricks and aggressive AI, it's still more about the cleanest line, the best jump, and the most proper landing (as it always has been). New to the series, however, is a powersliding mechanism. This was apparently a point of some contention to the developers, some of whom were afraid to stray too far from the formulas set by the first two.

After playing a considerable amount of the game, we're confident that the newly implemented powersliding feature is not such a drastic change that it ruins or even significantly alters the pace and flow of the game. In a nutshell, it allows racers to whip around tight corners without losing speed provided the lean is in effect. If it is, you'll appreciate a new, tighter kind of physics that simulates the suspension of individual tires, and not the box chassis. What this does for the game is add a little more weight to the ATVs, making them clunk a tad more on drops and grind a tad more mid-turn. Overall, this delivers a floaty, but just as fast feel.

With all that said, the biggest selling point of ATV 3 will still be the newly revised online mode. With support of up to six players, ATV 3 online boasts Duel, which allows direct competition and no AI riders, standard racing, an all-new comprehensive online scoreboard that records race data for players and teams, and a reworked lobby, chat, and email system. The new online component is being billed as a more community-centric system. Naturally, headset trash talking is a mandatory inclusion. The team at Climax is also real keen on destroying the lives of any potential cheaters, so expect a much stricter level of moderation, even if our time didn't allow for exact technical specifics to be brought up. 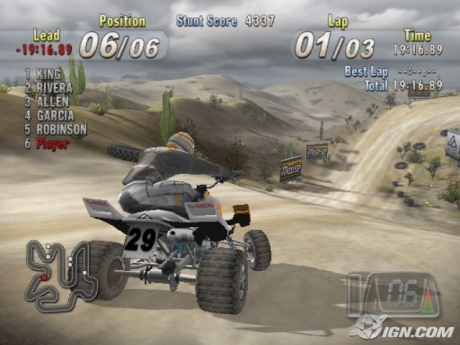 This year's ATV also comes with a host of mini-games that can even be played online. Of them, soccer seems to be the most interesting, and was at the very least the most time consuming during our stay at Climax's Brighton offices. This particular spin on what it would be like to play a game of football with your ATV controlled remarkably well, especially given the more hockey-like arenas in which it took place. It's a pretty simple game that involves passing, ramming to steal, and shooting. For as odd as it sounds, it may just be enough to keep the game diverse between all the racing you'll be doing. If soccer isn't your thing, also expect king of the hill, treasure hunt, tag, hockey, basketball, and pre-load. Hopefully it will be possible to set up a track list that alternates between race types and mini-games so that it'll never be necessary to exit out of a game and reconfigure. Anyway, if all that mini goodness doesn't do it, maybe the downloadable content will?

Yes...! ATV Offroad Fury 3 supports the hard drive! Full on hard drive support for additions that might include anything from new tracks, to new ATVs, to new paint jobs, to a giant alligator with helicopter blades shooting out of its neck are all in the works. It's hard drive support, and it's already planned. Praise be.

Not only is Climax doing the series justice by not turning it upside down, it also appears they're busy refining what will be the best ATV game to date, Offroad or not. The new multiplayer madness combined with new technology and a load of customization and mini-games are going to make for a pretty slick ride this November. We're confident -- confident enough that it will take a meteor strike to derail this one.