Ballance Wins the Wild One to Take the GNCC Points Lead

Millfield, – It’s been an up-and-down year for Team Yamaha’s Bill Ballance, the defending champion of the Suzuki Grand National Cross Country Series. Ballance normally storms off with a big win streak to start the season, but he’s had to fight with Alba Actionsport’s rider Chris Borich since the 2005 opener.But when the mud started flying at the Wiseco John Penton GNCC, Ballance found he could rely on his determination and experience to get to the finish – and he finished first. 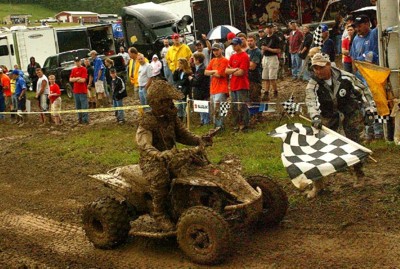 The muddy race was so wild that a pair of Pro Am riders, who start in the second row on the GNCC starting grid, moved into first and second overall early on. Adam McGill and Scott Barron worked their way to the front after slipping through bottlenecks, mud bogs and traffic. Barron ran into problems later, but McGill nearly hung on for the overall win.

“The last lap, I wanted to stop for gas, and my dad was just like “Go! Go! Go! You’re leading the race!” said McGill, who took second overall. “So I started to run out of gas, and I stopped over where Stephanie Parton was pitted, and I was like “C’mon Steph, give me some gas. C’mon!” And luckily she was nice enough to give me some race fuel. I was lucky to get back up here on the podium. There were bottlenecks everywhere. I’ve never expected anything like this in my life. I love it!”

Third went to Yoshimura Suzuki’s William Yokley, who the won the previous GNCC in the mud at Loretta Lynn’s. In all the chaos, Yokley managed to take the lead on the last lap, but he got stuck and dropped to third. As always, he still had a good time. “I picked good lines through all the bottlenecks,” said Yokley. “I really didn’t even get off the bike all day until the last lap when I was leading. But oh well. To only get off the bike once and end up on the podium, I’ll take it because it was crazy out there.”

The win is especially big for Ballance, as he moves into the points lead for the first time in 2005. “It’s about time,” he said on the podium. His rival, Borich, had mud clog his radiator early which led to some overheating. He ended up 15th. “It was really tough out there,” said Borich. Luckily, the GNCC overall championship includes two throw-away scores, so Borich won’t have to keep that 15th in the battle for the title.

The Wiseco John Penton GNCC is almost always plagued by bad weather, and this year was no exception when heavy rain and even hail touched down on the on Friday night. The GNCC Youth ATV riders were the first to attack the muddy course, with Walker Fowler taking the overall win there. Billy Good topped the morning race in the Four-Stroke Stock class on a Honda, with Traci Cecco taking the Women’s class on her Alba Actionsports Yamaha. Cecco is now tied for the Women's points lead with her long-time rival, Suzuki of Troy’s Stephanie Parton

After the race, Pro Am podium finisher McGill had to take off quickly because the teenager actually had to take his girlfriend to her Senior Prom. “I called her and told her I might be a little late,” he said. “I hope she understands. This means a lot to me.”

Pro Am rider Chris Bithell took fourth overall, and Am Pro Yamaha’s Chad DuVall finally logged a solid ride to take fifth. The sixth-place finisher, Johnny Gallagher, led a large portion of the race before getting hung up late on his Cernic’s Honda.

The Wiseco John Penton GNCC was taped for an airing on the Outdoor Life Network, and GNCC races air Tuesdays at , Thursdays at and Saturdays at

The Suzuki Grand National Cross Country Series continues in four weeks with the FMF Mountaineer GNCC in Summersville, West Virginia, on June 11 and 12.

McGill: Pro Am rider Adam McGill was all smiles after leading the race and finishing on the podium.