The second round of the Yamaha/ITP QuadCross ATV Championship series was at the new Valley Verde MX track in Cottonwood, Arizona. Yoshimura Brand Manager and atv racer extraordinaire Kory Ellis came out of the Glen Helen opener third, and had only one goal for the Arizona race – win. Ellis not only took the event - he walked away with it.

With his new Suzuki LT-R450 all Yosh'd out, the machine tore off the starting line and flew to the finish in both Kory's heat race and the main. Part of Kory's work at Yoshimura involves helping develop the Yoshimura motor specs. On Sunday, the specs that the Yosh shop had in place seemed pretty good as Kory pretty well "motored" on the competition.

"Our development team in R&D has done a lot of engine and pipe modifications to the bike," Kory explained. "They're actually doing a lot of race testing with my bike for Team MSR/Pro Taper/Suzuki/Yoshimura team."

Things certainly seem to be dialed in correctly as Kory took the holeshot in both his heat race and the main event. The track was narrow and tight with a lot of jumps. With that kind of set up, it's all about the starts.

"I'm not usually very good at starts, but this bike is really quick and really helped me pull the holeshot."

At the checkers, It was Kory first, Dustin Nelson second, and Jeremy Schell in third.

Kory is now in first place going into Round Three on April 15th at Arizona Cycle Park. Meanwhile, look for Kory at the GNC Glen Helen event on March 25th. 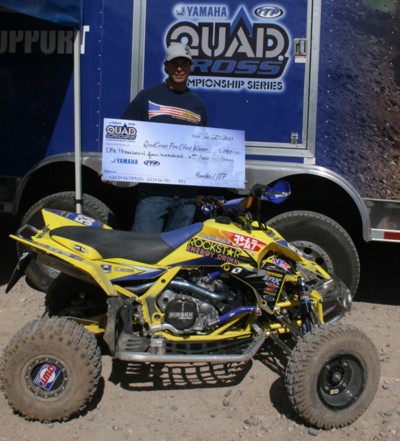