What do you do when you already have the largest managed off-road ATV trail system on the East Coast? Well, if you’re the Hatfield-McCoy Trails, then answer is to add even more trails make your system even bigger. 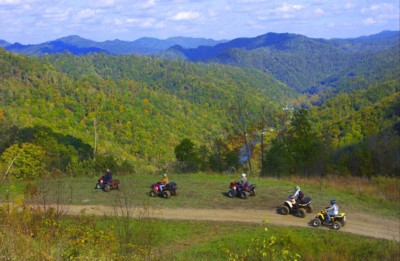 The Hatfield-McCoy Regional Recreational Authority, the managing system behind the trails, recently held a free-ride weekend to unveil their new Indian Ridge Trail System, which will start at the Ashland Trail Head and then wind throughout the hills of McDowell County in southern West Virginia. The Indian Ridge system adds 55 new miles of trail to the more than 500 miles already in operation.

“I hope the people of McDowell County are as happy about this new system as we are,” said Jeff Lusk, Hatfield-McCoy’s Executive Director. “Everyone has seen the economic and tourism benefits we’ve had in our other counties, and I think that with this system, and its unique amenities and nearby businesses, such as the Historic Ashland Company Store and Ashland KOA campground, the first KOA franchised campground in West Virginia, McDowell County will start seeing those benefits quickly.”

Those 55 new miles of trail really are 55 new reasons for the people of McDowell County to be excited in 2007. According to a 2006 study commissioned by the trail authority, the trails have had a $7.2 million impact in direct spending throughout its current project areas of Logan, Boone, Mingo, and Wyoming counties, and have created more than 146 new jobs, as well as providing $600,000 in tax revenue.