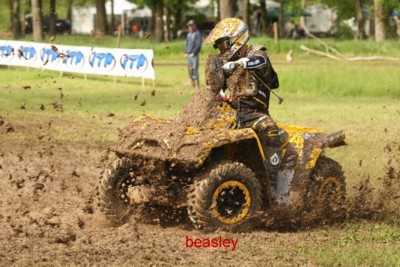 Loretta’s laid out a rugged track with some wide open areas, steep, narrow hillclimbs and they also incorporated a section of the motocross track to add some variety. The A.M. classes had a tough go of things as rain that fell the night before left the track slick and muddy and made for some challenging conditions which made Cliff Beasley feel right at home. Beasley had no trouble showing everyone that he meant business. Beasley laid down the fastest lap times in his class and finished 23 minutes ahead of 2nd place. Beasley finished his day with a time of 02:10:33.

Meanwhile Michael Swift was checking out on the rest of the 4x4 Limited class. “I was 2nd in the holeshot, but made the pass for 1st on a downhill when I took a different line,” said Swift. Once Swift made the pass, there was no turning back. Swift even caught up to the class in front of him. Swift’s efforts earned him a time of 02:03:57 and allowed him to take 8th overall for the morning classes.

Scott Kilby also ran a strong race this weekend. Kilby came off the line in 2nd and maintained his position for the entire 5 laps. Kilby finished with a time of 02:07:04 which put him in 2nd place in the 4x4 Open class and put him in 13th overall. Kilby’s strong consistent style currently has him placed 2nd in his class in the points race.

Rick Cecco once again encountered some bad luck this round and was only able to complete 3 laps before calling it a day. Cecco is looking forward to round 6 where he hopes to claim another win as he did in round 1.

Chris Bithell and Chris Jenk’s luck seems to have taken a turn for the better this weekend. Jenks ended his day with a top 10 finish in the XC1 class with Bithell just seconds behind him in 11th. “The bike did really well out there. The Warnert crew came up with some good ideas for this race. We put them to the test and everything worked out good,” said Jenks. Jenks did get hung up in the 3rd lap, which dropped him back to 13th, but he made the push and worked his way back up to finish with an overall time of 02:16:13. Bithell who had a bad start coming off the line in 19th, put the hammer down and began picking off riders one by one. Despite the rough track conditions, Bithell managed to work his way up to 11th and finish with a time of 02:16:54, which earned him 16th overall.

The Warnert team will once again be ready for action as they head to the John Penton (round 6) in Millfield, OH on May 10th, where Beasley will try to continue his sweep of the 4x4 Lites and Bithell and Jenks hope that luck will be on their side once again as they try for the podium