It was an intense weekend for the GNCC ATV racers in Hurricane Mills, Tennessee, as rain and mud kept the track interesting and the racers covered. The weather, however, was no match for Chris Borich who took his mud-covered Yoshimura-powered Suzuki QuadRacer R450 to the podium after an exciting battle through the woods. The defending GNCC champion made an exciting last-lap pass that put him in the prime position when the checkered flag fell. 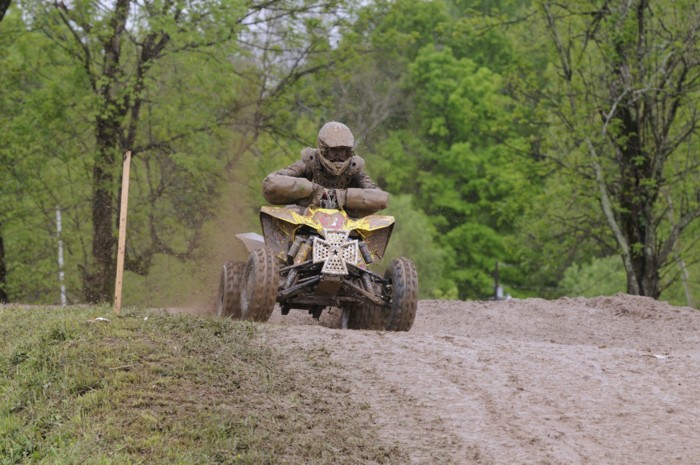 Borich announced his intentions for the race when he shot out from the start and took the holeshot. He kept the pace on his Yoshimura Suzuki QuadRacer R450 and took part in a four-racer battle that kept things interesting throughout the two-hour race. While Borich got passed after the first lap and then stopped for goggles mid-race, he was able to make the most of the power and performance of his Yoshimura-powered ATV and work his way back up to the leaders of the race. When an opportunity for a power move revealed itself, Borich made a last-lap pass that put him in first place as he crossed the finish line. From a pit stop to a three-second lead at the end of the race, it proves that Borich’s Suzuki performs like a true champion.

The win was Borich’s third straight of the season and fourth overall, keeping him in the series lead with a 22-point cushion. “It’s great to get another win, and I had a lot of fun battling these guys,” said Borich. “I got the holeshot and led most of the first lap, it seemed like nobody wanted to pass so I was the guinea pig going up the hills, but it all worked out.”

“Chris had a great season last year,” ATV Marketing Manager Kory Ellis said, “and it’s looking like this year is going to be even better for him. Yoshimura is happy to help get Chris’ quad to the front of the pack, and he knows how to stay up front.”